If you're going to invest your hard-earned money on a new mixer, you'll want one that will perfectly perform all of the tasks you ask of it, for years to come. However, not all mixers are created equal. Some mixers are better at kneading doughs, some mixers also transform into a multi-use appliance. At Everything Kitchens, we rigorously tested our top-selling mixers to find the perfect match for every cooking style. We literally got out our stopwatches and went through these mixers with a fine-tooth comb to see where each excels and where each could do better. We're going to see how well the Bosch Universal Mixer performed. 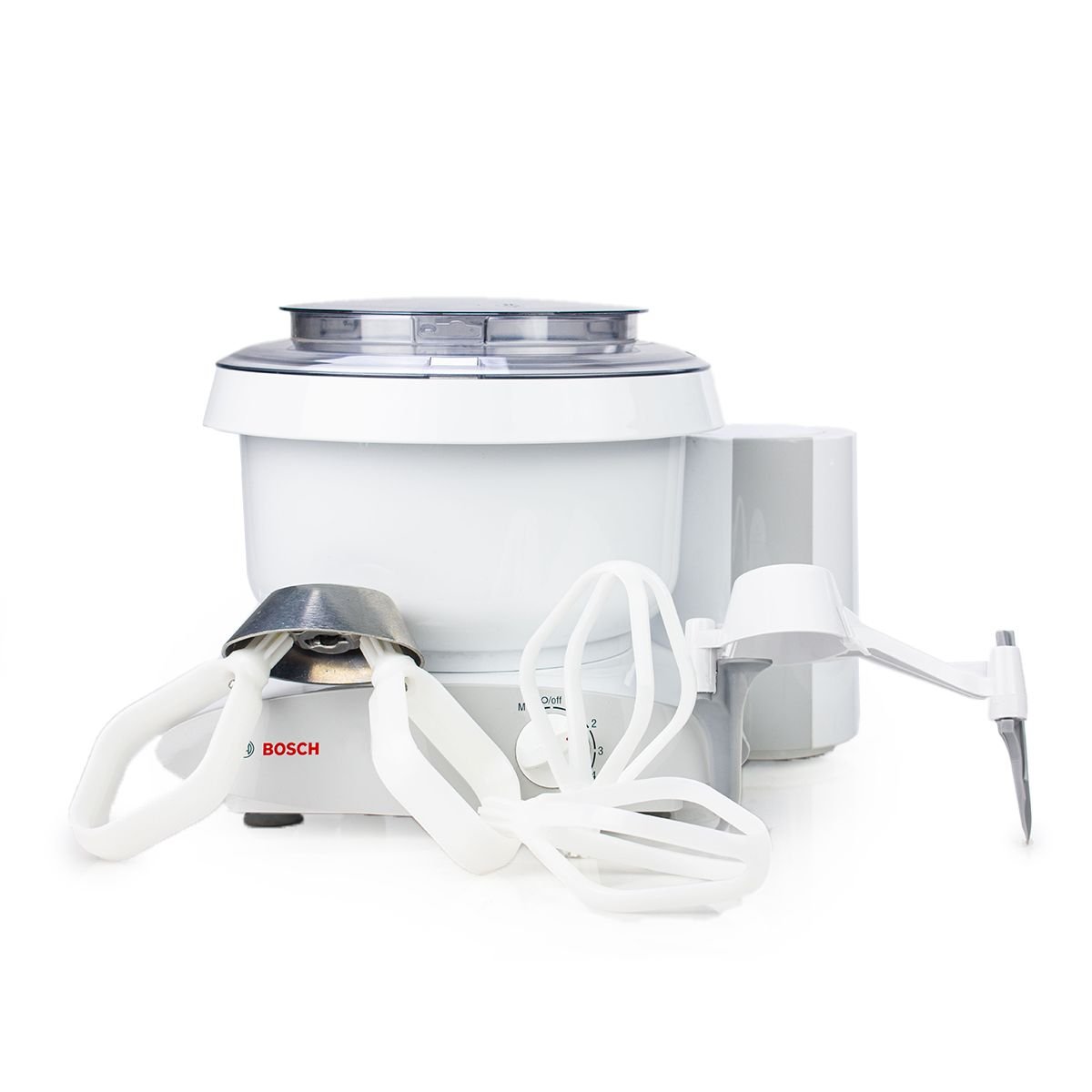 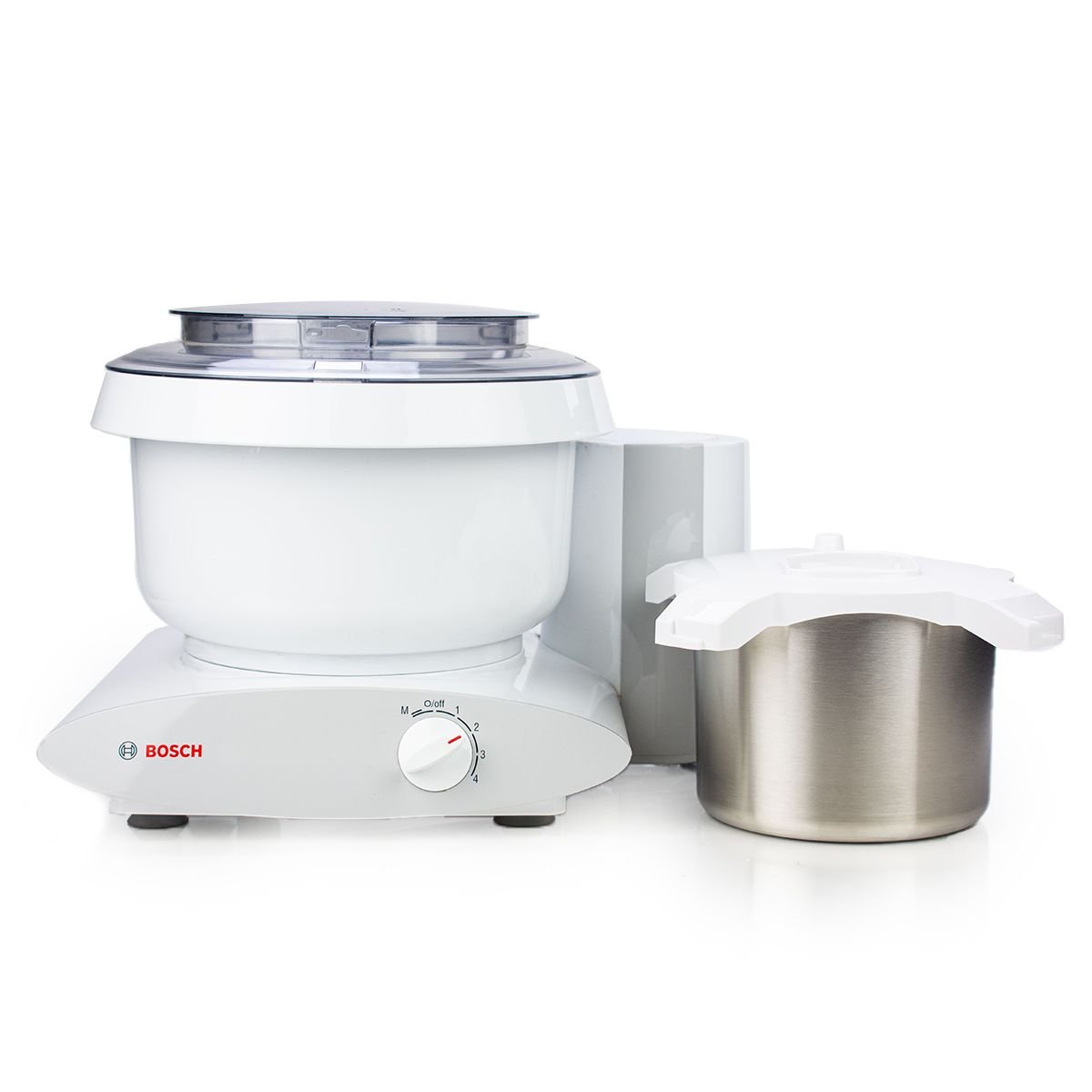 Best For:
Power-users who want to make large batches quickly and efficiently. The Bosch Universal's powerful 500W motor kneads through multiple pounds of dough and also can whip a mere 2 egg whites to stiff peaks. The huge, open mixing bowl makes it easy to add ingredients, and its dual-head tools work faster than the attachments on the other mixers we tested. Bosch also has a plethora of attachments to turn their mixer into everything from a pasta roller to a meat grinder.

The Bosch Universal might not win a beauty contest, but it does have many attractive features. Unlike tilt-head mixers, the Bosch's motor is mounted underneath the bowl instead of being housed over the bowl. With the motor underneath the bowl allows the top of the bowl to be almost completely exposed, which makes adding in ingredients incredibly easy.

We managed to make 12 loaves (14 lbs of dough!!) of bread in a single batch with the Bosch Universal Mixer.

The motor is a massive 500 watts (the standard KitchenAid Artisan has a 325W motor). The Bosch Universal is powerful enough to mix and knead up to 14 pounds of dough without shaking or struggling. That's also enough power to mix through 15 dozen batches worth of cookie dough at once. If you plan on mixing big batches, the Bosch Universal is worth considering.

Since the motor is mounted on the bottom, Bosch gives you an open bowl design - there’s no tilt head to get in the way. The open top makes it easy to add in ingredients. You can fill it all the way to the to the top and still mix evenly.

The suction cup feet securely anchor the light-weight Bosch to the counter so minimal shake occurs.

The body of the mixer is made of a white-and-gray polycarbonate material. Opting for polycarbonate makes the Bosch incredibly lightweight, weighing only 12.3 pounds. Now, most lightweight mixers are going to bounce around and shake while mixing at higher speeds or when kneading bread, but we had NONE of that during our testing, thanks to the super-sticky suction-cup feet.

These suction cups are not your run-of-the-mill, cheap-o, clear-plastic suction cups. The suction cups on the Bosch Universal mixer are heavy-duty, thick and work flawlessly. They effortlessly attach to the work surface, securely anchor the mixer while it's mixing, whipping and kneading, then release easily when it's time to move or put away the mixer. These are no suction cups to scoff at.

Four speeds to choose from. "M" is for "momentary pulse" giving you a burst of speed to quickly mix in that last bit of ingredients.

Controls on the Bosch are minimal and simple. There is one speed-control dial with four speeds, and a manual pulse function. The dial gives a nice, satisfying click between speeds, so there's no question about which speed it's operating at.

There are two places on the Bosch Universal for expanding and transforming the mixer into a multi-tasking machine. Under the bowl is the larger metal drive socket which has a high-torque drive used to drive the stirring/beating whisks, dough hook, meat grinder and other special accessories. At the top of the high-speed accessory drive, there is a plastic-resin drive socket for the blender, food processor, and other accessories.

The 6.5-qt. mixing bowl is HUGE, plenty of space to make triple batches of cookies or mashed potatoes.

The 6.5-qt. mixing bowl is similar in design to a bundt pan. Since the motor is mounted on the bottom, the entire top of the mixing bowl is open. This makes it incredibly easy to add ingredients while mixing. There is a cylinder in the middle of the bowl and the mixing tool slides onto a metal gear shaft at the top of the cylinder.

The two-piece bowl cover prevents splashes and allows you to add more ingredients in while mixing.

The bowl has a 2-piece clear cover to prevent splatters and messes while mixing.

Two is better than one - the dual-tool design is faster and more efficient than the competition in all the tests we performed.

Bosch mixer mixing tools have an ingenious and quite effective dual-head design. That means two cookie paddles or two wire whips spinning and working in tandem. Two tools working at the same time increases efficiency and decreases mixing time - that's how the Bosch Universal outperformed all the other mixers we tested.

The kneading dough hook also sports an interesting design featuring a blade and two hooks. The dough hook mimics a skilled baker’s hands as it folds, stretches, and tucks bread dough to achieve great gluten development. Underneath the dough hook is a plastic blade that scrapes the sides of the central shaft, to ensure all ingredients are thoroughly incorporated.

The Bosch Universal was incredibly fast at every task we ran it through. From cookie dough to whipping egg whites, the Bosch's powerful motor and dual-head mixing tool design did every test faster and more effectively than other mixers I've used in the past. Bosch designed this mixer to handle not only the smallest task of whipping two egg whites perfectly in only 45 seconds but also was made to perform massive tasks like making 12 pounds of bread dough at once all in the same 6.5qt mixing bowl. Bosch is perfect for whipping large batches AND smaller task with no drawbacks.

As far as kneading dough goes, the Bosch does an exceptional job and works great for routine bread making at home. We did notice in smaller batches, the kneading hook would start to push the dough around and no longer knead the dough. But other than that hiccup, the dual arm and blade kneading-mixing tool functions just as well, if not better than a traditional dough hook.

Great Aunt Rose's cookies mixing. Each paddle turns independently as the metal driver spins them around.

We used the cookie paddle mixing tool (sold separately) to make my great-aunt Rose's Chicago Chocolate Chip Cookies, which typically makes around 5 dozen cookies. The Bosch Universal did not shake or shudder while mixing, even when adding chocolate chips or oatmeal. It was also easy to add these ingredients to the cookie batter thanks to the unobstructed open-bowl design.

Bosch has numerous attachments available to make this a multi-purpose kitchen appliance. Grind your own hamburger with the meat grinder, roll out fresh pasta with the pasta roller and cutters, and chop all your vegetables with one of their food processors - there isn't a lack of attachments with Bosch. Click here to see a complete list.

Pasta roller and cutters, food processors, meat grinder, and even a blender is available for the Bosch Universal Mixer.

Bosch's Universal Mixer is the most efficient and easy to use mixer I've ever used. I love the unique design of the mixer. Since the motor is bottom-mounted, the top of the mixing bowl is opened up making it's easy to add in ingredients while mixing. Bosch doesn't skimp on power at all with the 500W motor under the hood. You can do a chef-sized task like powering through 14 pounds of sticky, thick bread dough. It's fast too - the dual-head attachments outperform the mixing tools on every tilt-head mixer we tested. If you see yourself regularly baking in the kitchen, the Bosch Universal is going to save you time and effort when making multiple dozens of cookies and letting this work-horse knead bread doughs for you. The Bosch has a little bit of a learning curve after being raised on tilt-head mixers, but after using it for making dough, cookies, and meringue I'd highly consider the Bosch as my main mixer in the kitchen.

Why Buy From Us